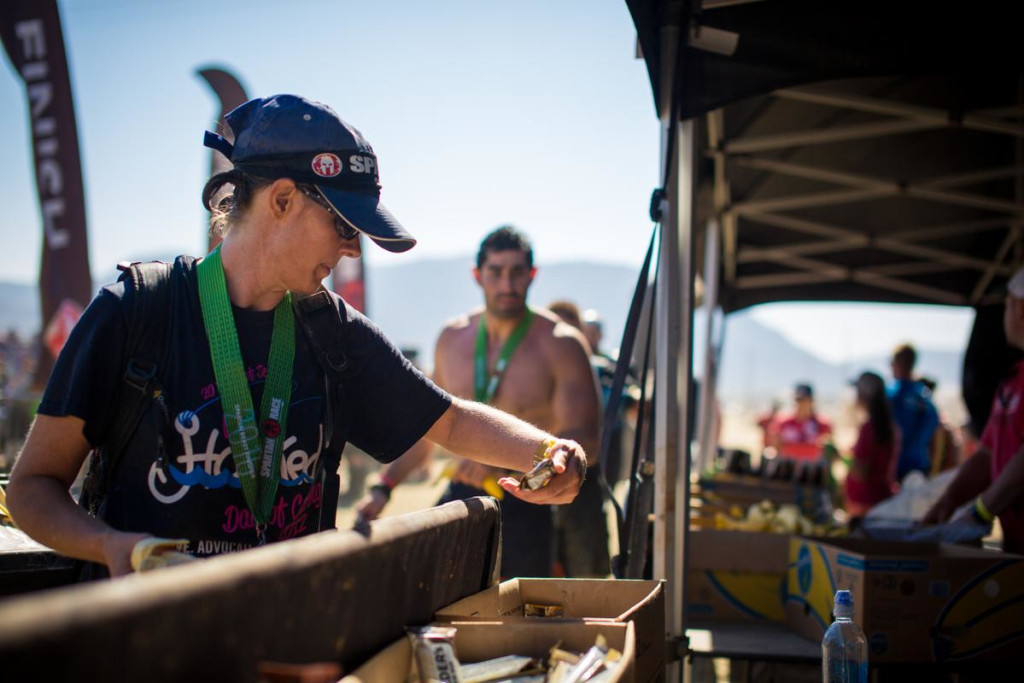 [This article was originally published in the August 2016 Issue of the Spartan Digital Magazine.]

It was a cool spring morning, and I was running the back trails of Maine, prepping for my next race and helping a client do the same. The client was a determined man who had taken himself from 260 pounds on a 5’4” frame down to 200 pounds. He had completed his first Stadium Sprint and was hungry for more.

On this day, as I was training this man for his first Trifecta in 2016, I was pushing him out of his comfort zone. During the run, he began to lag behind, and by the end of the run, he was exhausted. I asked him to show me his food log and tell me how many Calories he had for breakfast. Then, I asked him to pull up the estimated Calories burned during our trail run. With a 300 calorie deficit, it was no wonder he felt the way he did.

Improper fueling is a rookie mistake that nearly everyone makes at some point, and I knew it would keep my client from completing his first Spartan Beast. As his SGX Coach, I wasn’t just going to let him finish the race, I wanted him to leave it all on the course—Finish Strong. And while you might be able to muddle through a Sprint—or possibly even a Super—you can’t go into a Beast without getting your nutrition in top form.

What do we mean by the word “fuel”?

Proper fueling for a race means proper fueling for the 48 hours surrounding the race—before and after. What you do during this period will either add to your success, or it can detract from it. To understand why, we have to start by understanding what we mean by the word fuel.

In the nutrition sense, fuel means energy (Calories) that we provide to our bodies in the form of macronutrients (carbohydrate, protein, and fat). Most people have come to see these macros as either “good” or “bad,” (confused largely by the media, which oversimplify the issue). However, Spartans aren’t “most people.” We think critically. We don’t casually read an article that isn’t backed by legit resources and assume it speaks the truth. No. We challenge it. (We challenge everything. After all, we are Spartans.)

As Spartans, we must understand the importance of nutrition. We should by now know to eat foods that provide our bodies with complex carbohydrates (via whole grains, fruits, vegetables) lean proteins (chicken and turkey, fish, eggs, legumes) and healthy fats (fish, nuts and nut butters, oils containing omega-3 fatty acids). But while these factors dictate our daily choices, they differ from the choices that we will make for fueling.

The foods I just mentioned, although they provide our bodies with optimal nutrients, are not made for the fueling needs leading up to and during the race. For example, you wouldn’t have a chicken breast and broccoli for breakfast prior to starting a Spartan Beast. Nor would you carry a peanut butter sandwich during the race. (These foods won’t break down fast enough, and they won’t provide you with readily available carbohydrates for fuel.)

Choosing the right fuel has everything to do with carbs.

Carbohydrates are going to be our biggest fuel source for a race like the Beast. They come into play especially in the immediate fueling of our muscles.

How do we get carbs?

Simple. We get carbohydrates into our system by ingesting them. Carbohydrates are then either used for immediate energy, or stored for later use. To illustrate, the average 150-pound (68kg) male has about 1800 Calories of carbohydrate stored as liver glycogen (1400 Calories), muscle glycogen (320 Calories) and blood glucose (80 Calories) (Clark, 1997).

How does the body use this fuel?

The primary source of carbohydrate is the food we eat. The carbohydrates that we eat prior to our race (3-4 hours before start time) will assist in “topping off the tank.” During these 3-4 hours, the body can digest, absorb, and transport the broken-down carbohydrates to the muscles, where they can be stored as glycogen and later used for muscle contraction.

It’s important to understand how your body uses carbs.

If you are an athlete following a low-Calorie meal plan and focusing primarily on protein for meals, you may begin a race without maximum stored glycogen. This will set you up to “hit the wall” well before the finish. Why? I’ll explain below.

As soon as the race starts, we begin to rely on our carbohydrates for fuel in the following order:

This cycle continues until depletion. The same 150-pound man I described above, depending on lean muscle volume, has the potential to burn through 600-700 Calories while running for 60 minutes at 6 mph (Skolnik and Chernus, 2010).

Now imagine, as we mentioned, that this male athlete only has 1800 Calories worth of stored Calories from carbohydrates. How quickly does this athlete utilize those Calories? Athletes burn Calories differently based on their lean muscle mass and on how well their body is trained to utilize different forms of fuel. For the majority, this chain of events will determine how well their fueling contributes to their overall success.

Protein is also an essential macronutrient, but it’s not our focus when fueling race power and endurance. It plays an important role in forming red blood cells (which assist in carrying oxygen to the muscles), creating enzymes to assist metabolism, helping regulate fluid balance, and creating antibodies to support immune health (Skolnik and Chernus, 2010). As a primary fuel source, protein comes third to carbohydrate and fat metabolism.

Protein contains carbon, hydrogen, oxygen, and nitrogen. In order to be used for fuel, that nitrogen must be removed from the amino acid chains and excreted. This increase in nitrogenous waste increases the amount of water lost in the urine. Result: valuable protein is wasted and risk for dehydration increases (Benardot, 2006). For these reasons, our focus remains on fueling primarily with carbohydrates.

Putting this theory into practice

Knowing how to fuel your body becomes more and more important as the length of your race increases. If you know your fueling needs, you’ll be able to make food choices no matter what the circumstances.

My journey to the 2015 Pennsylvania Super proved this very point.

Due to life circumstances, I ended up traveling from Maine to Pennsylvania in the late afternoon the day before the race. Since I had not yet made the commitment to run only Elite waves, I would be starting at 11AM. I wanted to allow adequate time for digestion, so I planned to have dinner no later than 5PM.

As dinner time arrived, I knew I needed to make some decisions. I knew I wanted a carbohydrate-heavy meal with lean protein, not too much fiber, and plenty of water. GPS took me to a local sandwich shop, and we were back in business. One large turkey sub later, we were on the road. My concern after this was hydration, pure and simple.

Although the hotel was offering a continental breakfast, it started at 6AM—too late for me. I grabbed my coconut water and three of the hotel’s complimentary bananas for later and hit the road. Armed with knowing my Carb and Protein needs, plus months of practicing, I knew exactly what I needed. Another GPS search landed us at a local coffee shop.

No, it’s not what you think.

My best morning fuel on race day is instant oatmeal (which is low in fiber and digests quickly while providing excellent carbohydrates with added vitamins and minerals), so I quickly ordered up two servings of apple walnut oatmeal (“hold the walnuts and apple” to avoid added fiber) and kept the brown sugar. My three bananas and coconut water would serve as my intermittent fuel as my 11AM start time approached.

Along with my beet juice supplement, a couple of energy gels, and some water, these items made my Super one of my best races, and I finished among the top five women in the Open Category females. A road trip that could have had many barriers to proper fueling was just the opposite—since I knew my needs and had practiced them ahead of time.

Rewind—let’s recap on how I chose my fuels.

This is a lot of information, so let’s go back and look at what I was thinking through all of this.

1. Meal and snack choices were tried and true.

I had established the amount and type of bread that my sandwich should have, and I skipped the normal pile of veggies on top. The white bread allowed for easy digestion and storage, while the minimal vegetables also reduced slower-digesting fiber. (Normally, Spartans maximize nutrient-dense veggies, but I would steer clear around race day.) Also, I made sure I had dinner no later than 5PM to allow adequate time for digestion and absorption.

2. Breakfast was done 3-4 hours prior to the start of my race.

I chose instant oatmeal for a low-fiber carbohydrate source. The brown sugar (a deliberate choice) provided me with simple carbohydrates to replenish the stored glucose that may have been depleted during the night. Your Spartan SGX Coach will likely recommend that this meal contain 3-4g of carbohydrates per kilogram of your own body weight.

3. I topped off the tank with bananas and coconut water.

These provided electrolytes and were easily digested and absorbed. Energy gels and Gatorade also work.

4. Personally, I like to add a beet juice supplement.

I find it improves my energy and stamina while extending my exercise endurance.

OK, got it. What about during the Beast?

For every hour during the race, you should ingest roughly 1 gram of carbohydrate per kilogram of body weight.

For the 150 pound (68kg) male, this means 68g of carbohydrate per hour—if he’s going to maintain the same intensity throughout. For example, that’s about 3 Clif BLOKS Energy Chews (24g carbohydrate each). Assuming it takes 4½ hours to complete the Beast, that’s somewhere between 12-15 chews.

Is that actually realistic?

For some. It’s not a hard and fast rule. For whatever fuel you use, it’s best to get used to it before the race. I recommend planning long runs, similar in distance to the Super or Beast, and practicing your fueling needs weeks in advance. This will allow you to experiment, make changes, and repeat until you feel comfortable with the results.

What about after the race?

A well-fueled race means a strong finish. Once you jump over the fire and grab your well-deserved medal, what’s next? Well, there’s a reason why Spartan offers you a banana, a Clif Builder’s Bar, and FitAid at every finish line. These are all excellent ways to refuel after a race.

With these three items, you have everything you need to refuel your body right after the torture you just so willingly put it through. To learn more about how fast you need to eat after a race, read this article on nutrient timing.

A word on “Performance Nutrition.”

Spartan exists to rip millions of people off the couch and teach them that anything is possible with hard work, dedication, and perseverance. Part of that hard work is taking the time to learn how to operate the powerful machine that is your body.

Visit these pages to learn more about Spartan Race: